Re:Activism is a location-based urban game that maps the history of activism onto the streets where it happened, as players reenact and re-create the actions that once took place there. Structured as a non-linear race, teams move between historic sites in any order they choose, completing challenges with varying degrees of difficulty and risk.

The technology behind Re:Activism is pedestrian (literally!): a mobile phone with and the ability to text message, poster board, markers, and pamphlets. There’s no special software or GPS needed to play the game. Instead, it uses provisional tools commonly available around the world.

Re:Activism also has a game maker kit that has made it possible to recreate the experience in new citites. So far, it has been played in New York City, Beijing, Minneapolis/St. Paul, Atlanta, and Philadelphia. 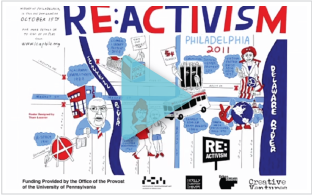